Greetings and welcome to a brief news update on the second day of a weeklong immersion program for 30 participants from 20 countries around the world and open public forum with up to 1,000 onsite and online participants. Tuesday focused on the intersection of diplomacy with climate and environment at the World Meteorological Organization, and on the uses of artificial intelligence as a tool for diplomacy and mediation at the Graduate Institute.

For example, computational diplomacy, a new academic topic, can be used to improve international aid or difficult negotiations. GESDA Board Member and former Swiss President Micheline Calmy-Rey explained how the Swiss government helped reach agreement between Russia and Georgia more than a decade ago by putting together a mechanism to regulate customs administration and supervision of commercial goods. It created trade corridors defined by points of longitude and latitude, instead of borders, and put in place new electronic platforms for statistical data coordinated with WTO.

“New technologies offer scientists unexplored avenues for solving complex problems with quantitative methods,” she said during the session hosted by the Science in Diplomacy Lab powered by ETH Zurich and University of Geneva. “Technology-based research in artificial intelligence, machine learning for international relations and negotiations can play a substantial role in facilitating diplomatic, multilateral solutions and building agile, adaptive institutions. At the same time, international policy professionals are often unaware of such methods, which have the potential to lead to better solutions.”

At the Graduate Institute, a DiploFoundation-organized debate focused on the benefits – and limits – of artificial intelligence as a tool for diplomacy and mediation. Research Director Katharina Höne noted AI covers a lot of applications and technologies such as image recognition, natural language processing and pattern recognition that feeds into decision-making. Its uses for diplomacy are still in the “exploratory phase,” she said, such as with discussions over borders, refugees, troop movements, or natural resources.

But “facts are not enough,” said Pascal Peduzzi, director of Global Resource Information Database (GRID-Geneva). “You need to trigger emotions. Common sense does not prevail. And bring people solutions, not problems, without scientific jargon. You need to change your language if you want to have influence.” Postdoctoral researcher Andreas Hirblinger said AI “cannot write peace agreements like AI can write novels, but it can analyze the responses of large-scale focus groups or mine and analyze text from peace negotiations.”

Much of the day was spent with WMO’s Secretary-General Petteri Taalas and Secretary-General Emeritus Michel Jarraud going over the intricacies of climate policies and politics. Taalas said the United Nations has no higher priority than climate change. “Of course, today we have this war in Ukraine, which is shadowing everything. But climate change is still the biggest challenge for this century,” he said. “We have to invest in the basic observing systems to know the climate baseline. So that’s a challenge for climate adaptation.”

The UN’s Intergovernmental Panel on Climate Change, hosted by WMO, is “a success story of climate science communication because they put on hold these climate skeptics and attacks on science. But finally, the truth has been understood and accepted,” Jarraud said, repeatedly emphasizing the power of science. “You can negotiate with terrorists. You cannot negotiate with scientists and scientific facts.” But he also stressed the importance of concrete climate action, because “if you do nothing, it’s still a decision.” 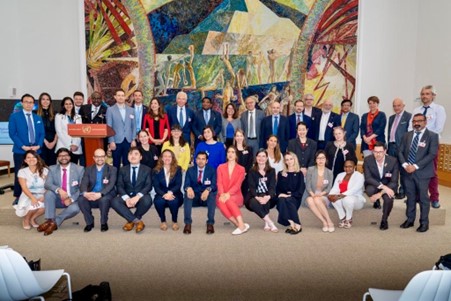