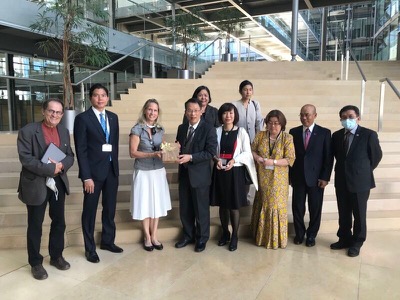 On 29 July 2021, a delegation of Swiss-based Ambassadors of member countries of the Association of Southeast Asian Nations (ASEAN) paid a visit to GESDA and were given a tour of Campus Biotech Geneva.

The delegation was given a broad overview of the activities and future plans of GESDA and the ensuing lively discussion addressed a number of topics such as the ways to learn from the current COVID-19 pandemic to prevent the next global crisis, the necessity to include ASEAN and other interested countries  into GESDA’s plans of action in order to co-develop solutions that would also benefit them, and the  consideration of the appointment of “scientific attachés” in their Permanent Missions in Geneva.

According to a report in the Courrier du Vietnam, Ambassador Lê Linh Lan of Vietnam “highly appreciated GESDA’s global vision in bringing together and connecting leading diplomats and scientific experts. GESDA takes advantage of the city of Geneva, where many multilateral organisations meet, to create new international partnerships.”