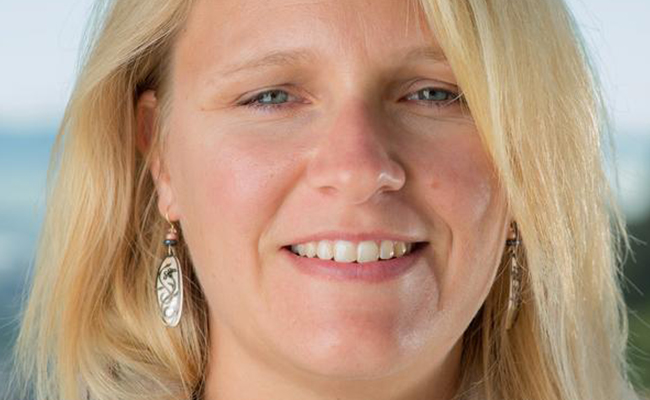 Scientists at EPFL are designing porous materials that may not only help with carbon capture but also address other environmental areas of ongoing or future conflict: access to clean water and the mining of precious metals.

With the planet’s temperature approaching catastrophic levels, decarbonisation, which entails removing global carbon emissions altogether, is receiving greater attention in both scientific and policy circles as a means to rein in the runaway temperatures. But while the best way to decarbonise our societies would be to convert entirely to clean energy, in the form of wind or solar, it is easier said than done.

“We know that global energy transitions are historically slow,” Professor Wendy Queen of EPFL told Geneva Solutions. According to her, it’s inevitable that we’re going to continue using carbon-based fossil fuels for many years to come. “We’ve therefore got to find additional ways to reduce our carbon emissions in the short term as well, and a really attractive way is by physically capturing carbon dioxide.”

Scientists such as Queen have been working in recent years on a variety of carbon capture and storage technologies to reduce atmospheric carbon dioxide (CO₂). One approach is to capture carbon dioxide at the source of production. The two main point sources for carbon dioxide are power plants, where fossil fuels are burnt to produce energy to heat and cool our homes, and vehicles. “You could imagine that if we could collect that CO₂ at relatively large sources such as power plants, that would be a really fantastic thing,” Queen adds.

The state-of-the-art tools for carbon capture are liquid amine-based scrubbers, which have been studied and used for many years for “scrubbing”, or capturing, carbon dioxide. “The problem,” Queen continues, “is that these materials are extremely inefficient, so they have what we refer to as a parasitic energy loss. That means that if you deploy these materials in a power plant, you expect that it’s going to decrease the efficiency of that power plant by about 30 per cent.” In other words, you have to burn 30 per cent more fuel to produce the same amount of energy.

An alternative to carbon capture at point sources would be to extract carbon dioxide directly from the air. Reforestation, particularly with plants that can take up a lot of carbon dioxide, is of course key. But technology can provide structures that serve as artificial trees, performing “direct air capture” of CO₂. Though, the low concentration of the gas in the air makes it both more difficult and more costly to employ this method.

Queen, with other EPFL scientists, is working on a material that may lower the costs involved in direct air capture. “We design highly porous materials called metal-organic frameworks, or MOFs,” she notes. “Basically these are the most porous materials in the world.” MOFs consist of metal ions interlinked with organic units. “You have what look like little building blocks that – when we mix them in solution – stick together and form these sponge-like materials,” Queen explains. “We try to control the internal surface, so we can selectively grab whatever we want from liquids or gases.”

The materials Queen’s laboratory work with have record-breaking surface areas of as much as 7800 m² in a single gram of material. “In one gram of material you can have as much material as a European football field.” The pores inside the material are of a similar size as the molecules the scientists want to capture. If you want to capture carbon dioxide from a mixture of gases, you simply pass the mixture through the material; only carbon dioxide molecules will stick to the inside of the material with the rest flowing out unimpeded. “You could emit the less harmful materials into the atmosphere,” Queen clarifies.

Solid materials such as those Queen works on have a distinct technical advantage over the liquid scrubbers, and it relates to the heat capacity of the material. Once the material captures carbon dioxide, it has to be released in order to be either converted into something valuable like natural gas or methanol or stored away. The greater the heat capacity of a substance, the more energy needs to be spent in order to extract the captured molecule from it. “Solids have a lower heat capacity,” Queen says, “so you don’t have to put as much energy in. You can potentially cut that parasitic energy loss by a factor of two with solid materials.”

So why is carbon capture not employed more widely? Queen speculates that there may not be sufficient incentives to do so. After all, even with the lower heat capacities, there remains significant parasitic energy loss, which would cut into the profit margins of companies if they were to be used in power plants. Another factor is that we still don’t know how to store the captured carbon in a way that is itself not energy intensive: compressing CO₂ into liquid form and transporting it for storage incur costs and require energy. For Queen, there needs to be a lot of interaction between policy making and politics and science.

“One of the major drawbacks in being in an academic laboratory,” she adds, “is that when there isn’t necessarily an incentive for industry to implement that material, it makes it really difficult to figure out how to get it to market.” Nevertheless, the materials from Queen’s laboratory are now undergoing pilot-scale tests.

Solid, porous materials have the potential to help not just with decarbonisation but with other existing and future conflict areas – particularly access to clean water – because of their versatility. They can be used to selectively remove toxic chemicals such as lead and mercury from water, and Queen and team are also working on extracting water from the air.

Queen points out a benefit of this to her own research: “One of the postdocs in my lab has received a grant to basically take this to market. She wants to form a start-up to extract gold from electronic waste. This could also bring us a bit of revenue!” Of course, any revenue from extracting precious metals from waste would be a drop in the ocean compared with research grants.

Queen’s laboratory is continuing to work on improving the efficiency of existing materials and designing new ones that can absorb and readily release large amounts of carbon dioxide, and which can be stable for a long time. These technologies carry great promise for solving many of our environmental problems, but they will ultimately mean nothing without strong support from the public and private sectors to pilot them and deploy them on large scales.

However, Queen is enthusiastic that new computational technologies such as machine learning and artificial intelligence more generally can help. It won’t be long, she says, before machines start making predictions for materials while also helping researchers like herself design the next best-in-class materials for carbon capture. “I think these kinds of tools will help us expedite the discovery of materials and fuel them getting to market much more quickly.”

Professor Wendy Queen contributed to GESDA’s Scientific Anticipatory Brief, Decarbonising the Global Economy and Society. The briefs are a series of expert-backed reports that provide an overview of possible scientific breakthroughs at 5, 10 and 25 years, with considerations on their impacts on people, society and the planet. This article was published by Achintya Rao in Geneva Solutions’ Science and Technology newsletter in partnership with GESDA.

GESDA has partnered with Geneva Solutions and provides them with a selection of science anticipatory news from our Best Reads newsletter for their weekly Science & Technology newsletter.