General Assembly of the Diplomatic Club of Geneva: Speech by Mr. Ivan Pictet 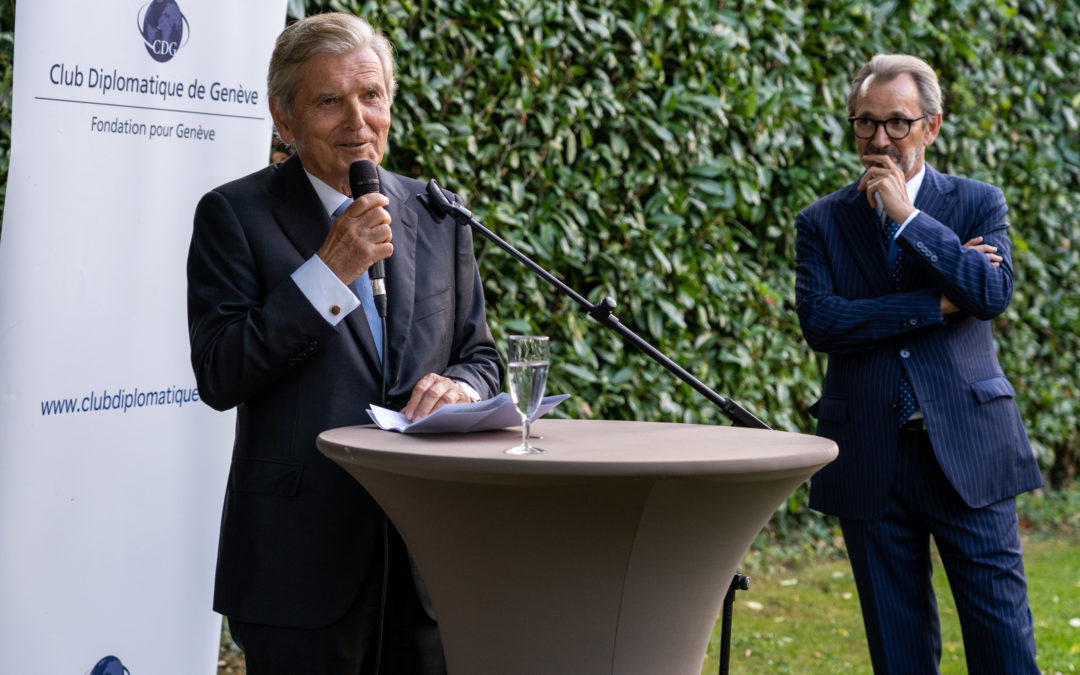 On the occasion of their 2021 General Assembly on 2 September 2021, the Club Diplomatique de Genève organised an evening in honor of Ivan Pictet, former President of the Fondation pour Genève, who gave the below speech.

“President of the Diplomatic Club of Geneva,
Dear Raymond,
Madame Director-General
Your Excellencies,
Ladies and Gentlemen,

You’ve done me the honour and kindness of giving me the floor after putting my modesty so severely to the test. Thank you very much for these comments, which have deeply touched me.

I’ve been asked this evening to speak about the future of diplomacy. Not necessarily the kind of diplomacy that’s practised in Geneva – which is an important platform for diplomacy – but rather diplomacy in general. And this is the view of an outsider who hopes for your indulgence and promises to be brief.

This is a subject that obviously sits well with your association. And it’s certainly a legitimate concern for the stakeholders in international life that you all are, agents of multilateralism and the first drivers of ‘International Geneva’, the hub of diplomatic relations, that is so dear to my heart.

As you know, the work of the Fondation pour Genève, an entirely private institution, seeks to support the activities of the Palais des Nations and the international organisations that surround it. But rather than compiling a situation assessment, which is now the role of its President, I’d prefer instead to present some ideas for the future of diplomacy, no doubt with a certain degree of candour, but also with a genuine interest as it concerns the very future of our little city.

If we look ahead 10 to 15 years, which makes it possible to identify the main trends, we can try to answer the following question: how will international relations develop over this period of time? What role will diplomacy play in these developments? What will become of globalisation, which conditions multilateralism and therefore Geneva as a centre of international diplomacy?

Various think tanks and institutes regularly publish projections for how the world ahead will look. They all agree that the increased competition with China will be the determining element shaping international relations. The scenarios range from a possible armed confrontation over Taiwan, to a competitive but more or less peaceful coexistence within the framework of the international institutions we know.

Of course, one can never rely on predictions that exclude unexpected events or those whose impact on international life may be underestimated. But there is a consensus on the characteristics of the world that is being transformed before our eyes. On the geopolitical level there’s no doubt that we’re seeing a shift towards Asia, followed simultaneously by migratory flows, political instability, the increasing scarcity of resources such as water, and technological innovation in all its facets, including space research. By the way, space is little talked about but could play a decisive role. And, of course, above all else there is climate change.

Another new factor that’s upsetting forecasts is the pandemic. No one had anticipated its strength and duration, and it is accentuating the fragmentation of societies and influencing the course of globalisation.

International trade is feeling the effects as well, although shipping figures for the first half of this year are at a record high.
Populist and nationalist movements are growing in strength, challenging the democratic system and seeking to replace it with authoritarian rule. There’s no doubt, too, that the world is experiencing a decline in freedom.

The scenarios I’ve just mentioned are far from optimistic ones. Would the only scenario today that would allow for competitive coexistence around a partnership while at the same time preserving cooperation, development and multilateralism be between China and the Europeans? And would this be desirable in view of the strong historical ties with the US?

In any event, we have to face the facts: Europe, which is less populated, older and poorer, hardly plays a role in a world that has long ceased to be Euro-centric. Europe is now home to four of the world’s eight largest economies. In 2050 only Germany will be left.

If multilateralism survives the double shock of globalisation and the rise of illiberalism, it will be thanks – among other things – to diplomacy, which is itself called upon to constantly reform itself. So it’s back to the schoolroom for you!

Continuous training is indeed a necessity for the diplomatic world, which is considered as one of the oldest professions in the world… Diplomacy will, of course, have to integrate new techniques, including artificial intelligence, which is going to have a very differentiated effect in the world, depending on the countries and activities. But it will bring no doubt gains in productivity.

On the subject of artificial intelligence, I can’t resist quoting what Hubert Védrine, former French Minister of Foreign Affairs, says about it in his Dictionnaire amoureux de la géopolitique, which I have briefly looked at :

I chose this quote for reassurance, but I am not totally reassured.

In any event, I favour the hypothesis of a revised multilateralism. I wouldn’t presume to comment on the changes that international cooperation will undergo. The most I can say is that the United Nations and the entire international system are functioning today in a very different way from what their founders envisaged in 1945. The UN doesn’t govern the world, but at least it inspires and shapes the decisions of governments.

Michael Møller – former Director General of the UN in Geneva, an honorary citizen of our city, and, may I remind you, a laureate of the Fondation pour Genève Prize, whom I’m delighted to see here this evening –deals with these issues in the excellent book published last year to mark the centenary of multilateralism.

The main question is whether states are still capable of working together to meet the global challenges they face, which can hardly be dealt with by national responses alone.

The author adds that, in his opinion, traditional international diplomacy is dead. It flourished in the days when there was time to think and make long-term decisions calmly. Today, leaders are forced to act more and more quickly, especially under pressure from social networks, and in the face of constant online disinformation.
For my part, I believe that states will remain the mainstay of international society, even if NGOs of all kinds will play an increasing role in their decisions. States will therefore need to communicate. So it is up to the diplomats to express the position of states with both conviction and nuance – tomorrow in the same way as today, and the same as yesterday.

For this reason we can assume that diplomats will be the driving force in the complicated phase of international relations that lies ahead.

Naturally, diplomats always reflect the position of their country and follow the directives of their political masters.
But it’s not enough for diplomats to enable the leaders to adapt to the new conditions of the wider diplomatic game. They themselves also have to be willing to change their modus operandi.

As I’ve already suggested, I think they should equip themselves with a new culture to tackle the new fields that are increasingly suitable for diplomatic action, hence the importance of the continuous training that I mentioned earlier.

Let me take two examples that have their roots in international Geneva. I’m thinking of international science diplomacy, which is becoming increasingly important. Diplomats need to acquire new skills so that they can also manage the digital transition. And so many other areas as well! Switzerland didn’t invent it, but our city has a place in it with GESDA (The Geneva science and diplomacy anticipator). The Swiss Federal Counsil has even sent an ambassador to Geneva with a specific scientific mission.

And there’s one more value that diplomats could bring to the fore in their work, and that is the very nature of the profession. It involves the ability to take their perception of the reality on the ground and speak plainly about it to the powers they represent.

“Tell the truth to power” is not a moral injunction. I’d be careful not to make it one; it’s a necessity because the people on the ground have the authority to see and tell things as they are. And it’s their duty to do so.

Among other things, these adjustments should make it possible to consolidate Geneva’s place at the heart of this redefinition of multilateralism and in the face of the onslaught of globalisation, despite the ravages caused by the pandemic, which is temporarily slowing down movements.

As Raoul Delcorde, former Belgian ambassador and author of a book, La diplomatie d’hier à demain (Diplomacy from yesterday to tomorrow), which I briefly consulted, notes: “The world needs diplomats. Globalisation makes diplomacy more necessary than before because international negotiation is the best antidote to chaos. It’s a stabilising element as the rules of the game have become more complex.”

If diplomacy is to change and become stronger, the same goes for multilateralism – if only to integrate the new facts of globalisation, which have such a strong impact on the multilateral process. Michael Moeller would like to see new forms of multilateralism emerge: “more effective, more participative and more inclusive”.
In this spirit, I believe also that an experiment tried in Geneva, which has proved its worth, can serve as a matrix for the renewal of multilateralism. I’m talking about the public-private partnership as seen for instance at WHO, The Gobal Fund, or in the Gavi Vaccine Alliance or other international bodies who only represents 8% of the total budget of public and private health related organisations based in Geneva.

As you know, the number of motivated and committed states cooperating with companies or foundations from the business world, with the support of the scientific community, is, unfortunately, limited. It’s the marriage of public power and private-sector strategy, constantly striving for sustainable and tangible results. The private sector is an incubator of international life that diplomats should know how to exploit, especially if they have the benefit of the knowledge that their continuous education – yes, I stress it again – or, for example, an internship in a company can provide.

I’ll conclude with the observation that in this turbulent, revolutionary, uncertain century, diplomacy must gain influence, but as an art and not a science. And I cannot end these few remarks without paying tribute to the work of the diplomats I’ve had the opportunity to see at work throughout my time with the Fondation pour Genève and the Diplomatic Club.

Please allow me to address my own country’s diplomats with a final quote from a well known foreign diplomat: “In my various postings, I’ve always appreciated the competence of my Swiss colleagues, their good judgement, their realism, their remarkable mastery of working in three languages and their discretion.”

Will these qualities be sufficient for the diplomatic role to which Switzerland aspires? I sincerely hope so.

Thank you very much for your attention.