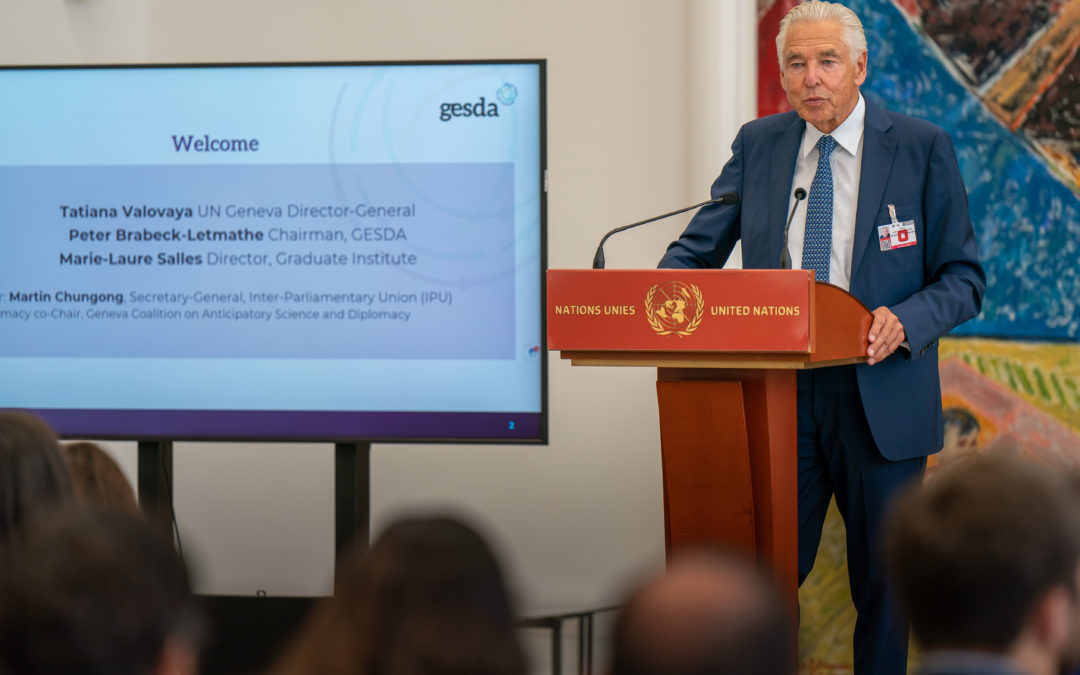 Greetings and welcome to a brief news update plus photos from the high-level panel session at the UN Library in the Palais des Nations (Credit: Gabriel Lado/GESDA).

The opening ceremony is available to watch on YouTube.

Swiss foundation GESDA and 20 other Swiss and global institutions welcomed 30 participants from 20 countries around the world to a weeklong immersion program and open public forum on science diplomacy in Geneva. The week of training and discussions is a first step toward building a curriculum for universities worldwide to teach science and diplomacy professionals how to interact in an interdisciplinary manner. [At their introductions, participants were asked to disclose something not on their CVs; seems quite a few also share a passion for dancing, music and cooking.] The open public forum included a high-level panel session where Inter-Parliamentary Union Secretary-General Martin Chungong emphasized that “what happens here has ramifications for the rest of the world.” Graduate Institute Director Marie-Laure Salles said science has never been as powerful and yet as “contested” and “questioned” as it is today. “Beyond the immersion program, which has a hugely important role to play naturally,” she said, “our discussions on science and diplomacy need to reach well beyond specialists and already-convinced experts.”

GESDA Board Chairman Peter Brabeck-Letmathe began by outlining some of the challenges ahead. “There is a great risk in today’s world, at least from my perspective, that we will, for some time at least, be reliving the zero-sum game between states,” he said. “We need to ensure that scientific and technological developments are accessible to and, perhaps much better, are really co-developed by as many people as possible.”

Director-General of the U.N. Office at Geneva Tatiana Valovaya said the world faces “the most difficult and most challenging period” since the Second World War. “We have so many crises all around us. War, military conflicts, geopolitical tensions, global mistrust, climate change, growth in poverty, the risk of hunger in many parts of the world,” she said. “But of course, the key challenge of the day is not just to see that there is this scientific and technological progress, but to generate it in a way which would provide benefit to the whole of humanity.”

Geneva Centre for Security Policy Director Thomas Greminger said emerging technologies such as AI affect the global balance of power militarily and economically, as well as nations’ ability to fight and win wars. “There is clearly this notion that unlocking the potential of emerging technologies will propel early and successful adopters far ahead of the rest. This technological competition, in particular the field of artificial intelligence, but increasingly also in other fields such as quantum computing, is, for instance, central to the geopolitical competition between China and the U.S.,” he said. “And artificial intelligence is, by the way, already extensively used in intelligence these days, including for surveillance purposes and in particular also in the war that we are currently witnessing in Ukraine.”

University of Geneva Rector and swissuniversities President Yves Flückiger defined diplomacy as the art and science of maintaining peaceful relations among nations, groups and individuals. “The Russian military aggression in Ukraine, which adds to so many other conflicts in the world, reminds us of the fragility of peace and how necessary it is to preserve it. The scientific world is no stranger to what is happening. Faced with the magnitude of this crisis, the University of Geneva is working to preserve exchanges, to preserve dialogue among the international academic community. We share the same conviction and conception of scientific freedom and academic integrity and are a vector of peace in the world.”

International Science Council President Peter Gluckman said the science community during the Cold War was “critical to maintaining and building relationships between protagonists at a time when there were no other ways to do it.” During the last two months, he said, “I’ve been deeply involved with my team on the issues around Ukraine. Should we expel from our membership the Belarussian or the Russian [science] academies because of the issues that their government or their dictator has undertaken? Extensive consultations with many foreign ministers, with many scientific organizations — the unanimous view was, we must not. Because as we go into a period of tension, again, the ability of the IOC as a track to organization and science diplomacy and repairing major differences allowing the sustainability agenda to pick up speed is critical.” Gluckman also said it was important to define science diplomacy. “In my mind, it’s about using science to achieve diplomatic goals. Often, we find international science cooperation to achieve scientific goals. Here we are talking about achieving diplomatic goals,” he said, adding that the goals should revolve around achieving what is best for the global commons. “But when we think about diplomacy between governments, we must also think about diplomacy with citizens. Because governments and citizens are intimately related.”