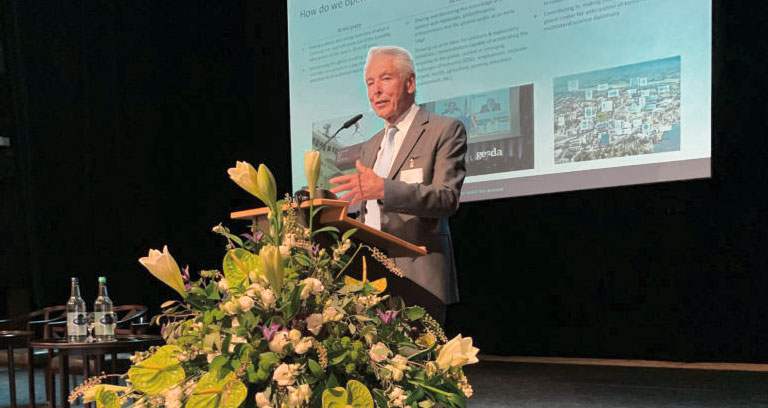 As it gears up for the next 10 years, the Geneva Science and Diplomacy Anticipator Foundation (GESDA) plans to fulfil its mission in ways that also contribute to Switzerland’s growing international influence.

This is the message that GESDA’s Chairman Peter Brabeck-Letmathe presented on Friday in the Swiss capital to the Ambassadors’ Conference held from 22 to 26 August 2022 in Pontresina and Bern. The annual conference this year focused on the war in Ukraine and its repercussions for Swiss foreign policy.

Invited by the Federal Department of Foreign Affairs (FDFA) to speak on “the challenge of global governance in the light of science and digital technology,” GESDA’s board chairman said the public-private Swiss foundation’s promotion of science and science diplomacy will bolster Switzerland’s foreign policy – and overall Swiss excellence – by strengthening Geneva as a global hub of multilateralism through new interest from a host of international proponents and investors.

Brabeck-Letmathe recalled it was the FDFA itself that first put forward the idea of creating such a foundation. In 2019, Switzerland’s Federal Council launched a three-year pilot project in partnership with Geneva’s government. Earlier this year, the federal government confirmed its support for GESDA to launch beyond the pilot phase for the next 10 years. While many countries have scientific ambassadors, Brabeck-Letmathe emphasized, the Swiss foundation takes an innovative approach. It is based on a public-private partnership, he noted, with some 65% of its funding so far coming from private sources.

How does GESDA promote science and science diplomacy? First, by looking for promising innovations that are likely to advance humanity over the next five, 10 and 25 years, Brabeck-Letmathe said. GESDA introduced the Science Breakthrough Radar, a new global system for identifying the foremost laboratory advances over the next quarter-century, as a tool for policymaking that looks ahead to the future. The first edition was published last year and it is being updated every year by a global network of hundreds of scientists.

Based on the Radar, GESDA holds an annual Summit, a global platform for scientists, diplomats and other leading figures to offer proposals that accelerate the implementation of scientific advances. It draws on the power of anticipation by examining what is potentially going to happen as a result of those breakthroughs. The next Summit is scheduled for 12 to 14 October in Geneva.

Knowing that solutions to the planet’s challenges can only be decided on a multilateral scale, Brabeck-Letmathe concluded, diplomacy is needed to support the process: Swiss embassies, scientific consulates and business hubs are all essential to reinforce the desired dynamic.