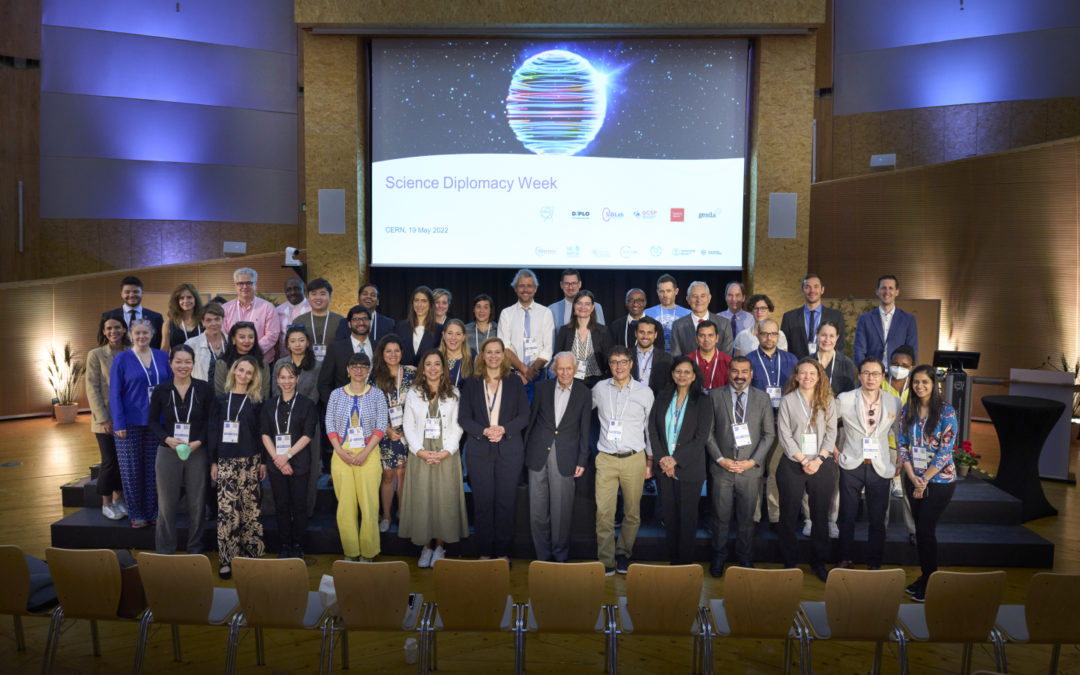 Greetings and welcome to a brief news update on the fourth day of a weeklong immersion program for 30 participants from 20 countries around the world and open public forum with up to 1,000 onsite and online participants. Thursday’s activities mainly revolved around a visit to CERN, the European Organization for Nuclear Research, where experimental physicist and former CERN director general Herwig Schopper delivered a history lesson. “We used to call it science for peace, now we call it science diplomacy,” he began. “For me, it’s the same.”

Schopper, who headed CERN from 1981 to 1988, called it the “leading laboratory in the world” and a forerunner of modern science diplomacy where British and German scientists collaborated for the first time in the wake of World War II. Science diplomacy, he said, is the work that is done to “transfer very useful science into politics” and CERN has become “a symbol where a project can be executed and brought to success.” He said he was particularly shocked at Russia’s invasion of Ukraine because, after witnessing first-hand the atrocities of World War II, he “thought that humanity has received a lesson and no big war would be started again,” but realizes now he was wrong. (Russia’s observer status at CERN was suspended in accordance with a CERN Council resolution on March 8.) “The ultimate objective of politics is not military actions. Every war ends in the end with negotiations, and I think this will happen this time. What is important is to prepare for what happens after the war,” he said. “I hope that CERN will play a similar role after this disaster now.”

After a tour, Charlotte Lindberg Warakaulle, CERN’s director for international relations, gave an overview of the treaty-based intergovernmental organization for scientific cooperation in Europe, which began in 1954. Fielding questions, Warakaulle noted Russia’s observer status suspension means for the moment “the existing cooperation is maintained” but no new cooperation is allowed and the CERN Council will discuss the issue again in June. Pippa Wells, deputy director for research and computing, explained that a more delicate question is how to include the names of authors affiliated to Russian institutes on newly published research – an unresolved topic. Russians made up 8.7% of CERN‘s scientific users, or 971 of its 11,175 researchers, as of the end of 2021. Ukraine, an associate member, and Belarus, a non-member, had 26 and 24 researchers, respectively.

More broadly, Han Dols, section leader of CERN’s Business Development & Entrepreneurship Section, said “serendipity pays off” in its scientific collaborations with European companies. “We love to have this positive impact but honestly it also helps me to motivate people internally,” he said. “Finally, we also like to recognize that if there is a company from a member state, then we do like to prioritize that. … Our member states are important to us.” In answer to a question, he said CERN generates as much as 25 terabytes of data each second, but throws a lot of it away. At a session about how scientists interact with CERN and other Geneva-based international organizations, experts said organizations’ data should be considered open public goods. “It’s back to openness and transparency. You’ve got to put the data up there and facilitate a discussion,” said Steve MacFeely, the World Health Organization’s director of data and analytics. “One country, I don’t think, should be able to stop development because it’s uncomfortable.”

Elsewhere at the Graduate Institute, the Swiss PeaceTech Alliance – created by EPFL (the Swiss Federal Institute of Technology Lausanne) and the Graduate Institute – spoke about the role of technological innovation to promote “peace by design,” including a project to deescalate online polarization. Annyssa Bellal, an international lawyer and executive coordinator at the Geneva Peacebuilding Platform, said an important aim of their efforts is to bring together institutions to talk about peace-building. “We want to apply peace principles to tech development and avoid the trap of ‘tech solution-ism,’” said Jérôme Duberry, managing director of the Tech Hub and a senior researcher at the Albert Hirschman Center on Democracy (AHCD) and Center for International Environmental Studies (CIES). “Our aim is to put humanity, people and the planet at the heart of technology.”

A session on science diplomacy for water and peace looked at international efforts by the Geneva Water Hub – which was established by the Swiss government and University of Geneva – to develop proposals for governance to reduce water-related conflicts. “Water has a great potential for stability and peacebuilding. The interface between science and diplomacy is a no-brainer for us,” said Christian Bréthaut, scientific director at Geneva Water Hub and co-director of the UNESCO Chair in Hydropolitics at the University of Geneva. Mara Tignino, a reader at the faculty of law and lead legal specialist of the Platform for International Water Law at the Geneva Water Hub, said that with urban armed conflict on the rise, there is the increasing risk that “when there is an attack against an electrical facility, there is a clear impact on the water supply of the civilian population.” As a solution, she said, her organization’s Geneva List of Principles on the Protection of Water Infrastructure is “a soft law document” against using water as a weapon of war and other violent actions. “We see a lot of intentional attacks,” said David Kaelin, an environmental engineer and urban services and policy adviser to the ICRC. “When you start bombing a city, you will inevitably hit parts of the infrastructure system.”