Looking retrospectively at 18 months of activity: the GESDA Activity Report 2019 & 2020 is out 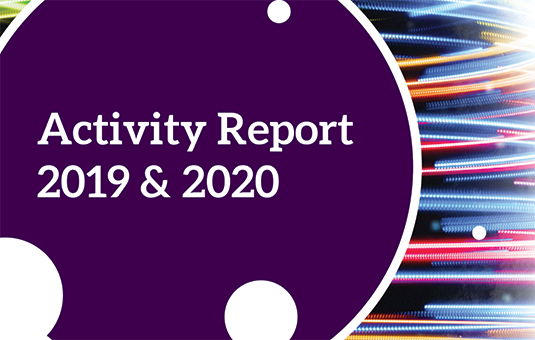 GESDA’s first annual Activity Report is rich in fact and figures, demonstrating our commitment in achieving our milestones for our pilot phase. Our operations are split in four main categories: science anticipation, diplomacy acceleration, translation into action & Impact Fund, global visibility –a glimpse of which is described below.

In just a few months, GESDA convinced 68 Academic Moderators and global scientific experts, all of them leaders in their respective field, to take part in our global project – which they enthusiastically did. This collective work led to the materialization of one Anticipatory Breakthrough Report and 12 subsequent Scientific Anticipatory Briefs (SABs), foreseeing what science will deliver to the world in 5, 10 and 25 years.

GESDA’s diplomacy acceleration activity is supported by 17 Diplomacy Moderators, most of them who took part along with the Academic Moderators and global scientific experts in our first Science & Diplomacy Plenary Meeting, on 18 December 2020. Since 1 January 2020, we have built a strong awareness by introducing GESDA to 35 international organizations, over 50 diplomatic missions and over 80 key contacts of International Geneva.
The 12 SABs’ impact on people, society and the planet have been discussed and scored and an initial list of potential solutions has been drawn up.

CHF 3 million in private philanthropic funding were raised to match the public sector seed funding, and advanced contacts are ongoing with additional philanthropic foundations to complete the funding. In this regard, GESDA identified 80 potential partners.
Our first partnership was established with Fondation Botnar within the framework of their new International Digital Health & Artificial Intelligence Research Collaborative (I-DAIR) project, of which the concept phase was accompanied by GESDA.

In just 5 months after their creation in August 2020, GESDA attracted 1,000 followers and subscribers on its various channels: the weekly Best Reads newsletter (a curated review of press and web contents related to GESDA’s four platforms) and the regularly fed Twitter, LinkedIn and Facebook pages. Our brand new, revamped, website, with regularly updated news on GESDA’s activities, was launched on 9 December 2020, just one year to the day after the launch of the initial landing page. In addition to these media, we have signed a partnership with the digital news platform Geneva Solutions.

As far as events are concerned, we participated in three events related to International Geneva: 100th Anniversary of the League of Nations, the “Geneva Day” at the World Economic Forum 2020 in Davos, and the IHEID/EPFL Data Summit 2025.