The first GESDA Science & Diplomacy Plenary session, as seen by the participants 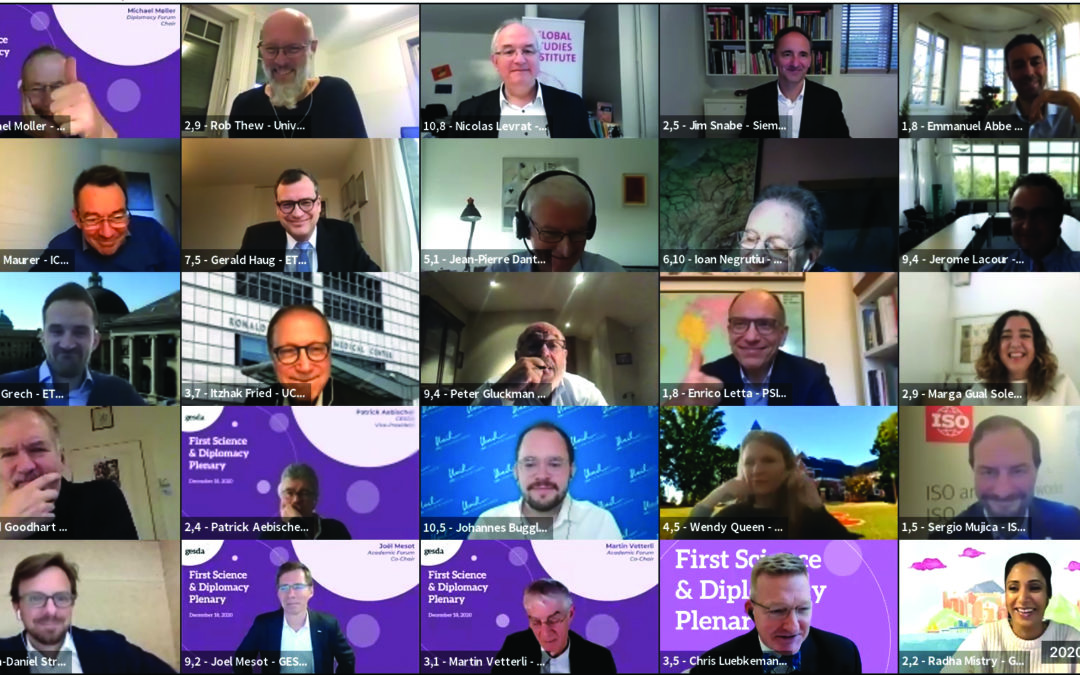 GESDA’s mission is to anticipate possible scientific advances and accelerate the development of solutions built around them, whether technological or institutional, for the benefit of people, society and the planet. With this in mind, GESDA initiated in summer 2020 a scouting phase of scientific breakthroughs at 5, 10 and 25 years, and identified emerging research which will have major impact on humanity. A work which led to the writing and delivery of 12 Scientific Advisory Briefs (SABs) in autumn that same year.

The next step was to consider those SABs as a basis for discussion, with GESDA’s Diplomacy Forum members, around related aspects that go beyond the science itself, like regulation, ethics, equity of access, etc. For that, GESDA held (online), on 18 December 2020, its first Science & Diplomacy Plenary. It was the kick-off of a pioneering collaboration format: rarely have the worlds of diplomacy and academy so closely intertwined. In a warm, studious, and dynamic atmosphere, sixty-one high-level personalities (44 active participants and 17 external observers) from these communities zoomed in from 13 countries and enriched the discussions around those SABs. The exercise was at first a bit challenging as these decision-makers had to immerse themselves in complex scientific topics they usually don’t master. But shortly afterwards they grew more confident as they understood the bigger picture, their role involving supports on regulations and at an institutional level rather than on hard sciences.

This milestone event helped GESDA go from anticipatory scientific emerging topics to the first set of concrete ideas for solutions. Now, each of the latter will be at the core of a dedicated task force, whose mission will be to assess their feasibility and to come up with a development and implementation plan proposal.

This Plenary session also laid the foundations for a common understanding of how to work together on frontier sciences and what they can bring to humanity. 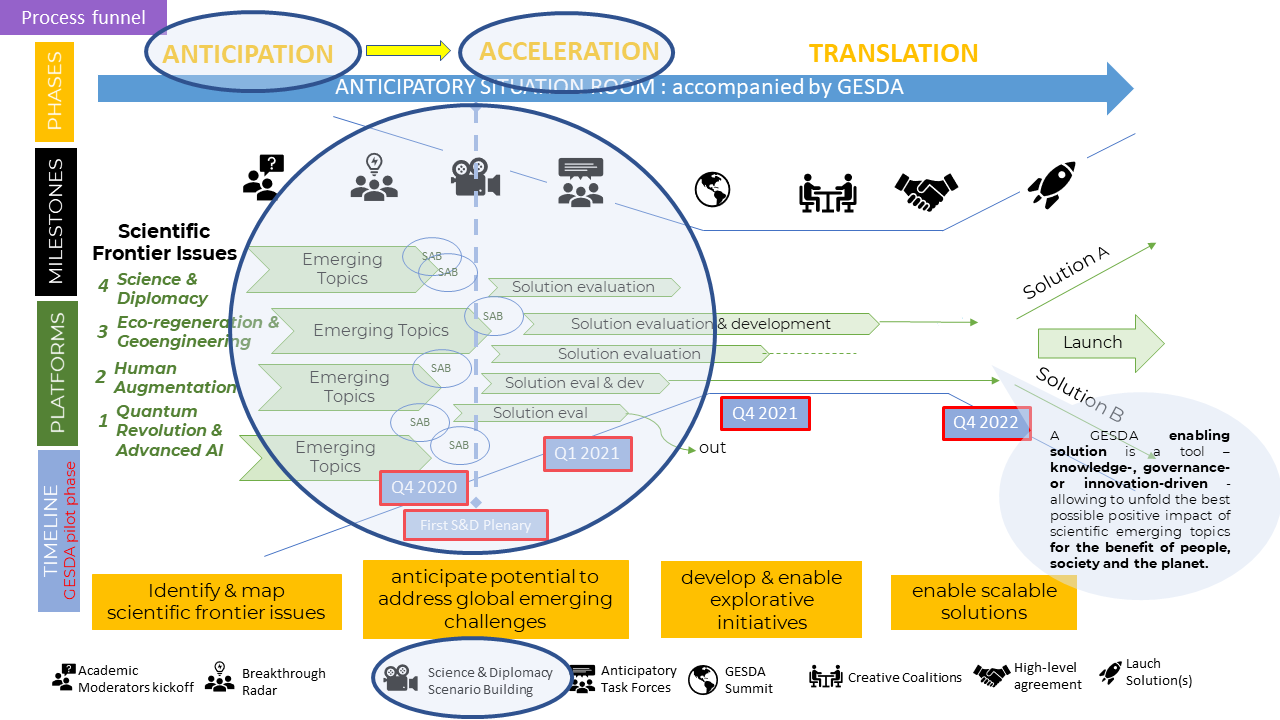 And who better than the Experts and Moderators to talk about this first? Their commitment is palpable.

“From a purely scientific point of view, long- term anticipation – at 25 years – is an amazing task that we do not do often enough, or almost avoid, in our daily work. It’s conceptually and scientifically interesting, extremely important, but also very difficult – or should I say impossible? In my opinion, it’s completely lacking in science today and should be a new field of academia.” Olaf Blanke, holder of the Bertarelli Foundation Chair in cognitive neuroprosthetics at EPFL and author of the SAB on memory enhancement and cognitive engineering

“More and more scientific and technological breakthroughs will come from the private sector and will make it harder for policymakers to put regulations in place without slowing innovation. We need to find a balance, and have an anticipatory mechanism in place.” Marga Gual Soler, WEF Young Global Leader, Visiting Professor in Science Diplomacy at the Universidad Nacional Autónoma de México, and former High-Level Advisor to former European Commissioner Carlos Moedas. She authored the SAB on the future of science diplomacy.

“We wrote the Scientific Anticipatory Briefs to create clarity on these topics. Now, following the Science & Diplomacy Plenary Meeting in December 2020, we need to think creatively outside the box with global leaders, to identify how we can have an impact.” Matthias Troyer, Distinguished Scientist and Quantum Systems Architect, Microsoft, Seattle. He authored the SABs on Future quantum technology and Socio-ecological foresight.

“Anticipation is absolutely critical, and it’s something that, as scientists, we don’t think about as much.” Samira Kiani, Associate Professor, University of Pittsburgh School of Medicine. She authored the SAB on the future of human genome editing.

“Scientific advice should not just be used as facts for decision, but also to change the process of decision-making. That is where it is transformational!” Lidia Brito, Director of UNESCO’s Regional Bureau for Sciences in Latin America and the Caribbean in Montevideo and former First Minister for Higher Education, Science and Technology of Mozambique.

“Institutions are always a step behind; science and scientists have an essential role to play in a renewed multilateralism. The worlds of science and diplomacy must establish a sustained dialogue. The main obstacle is to understand each other with the language difference (social sciences vs science, technology, engineering and mathematics). The future will be different as students will be trained in both languages.” Enrico Letta, former Prime Minister of Italy, now Dean of the Paris School of International Affairs.

“Science anticipation is very important, but how can we best govern it so that it takes the global community to where we should be going? We should target tangible outcomes on solutions; we can talk a lot about challenges – and opportunities – but in the end, we want to know how to solve them.” Mami Mizutori, Special Representative of the UN Secretary-General for Disaster Risk Reduction.

“In this ‘Age of Emergence’, we need to include new perspectives from communities that have not been at the forefront, to draw on more diverse forces.” Nanjira Sambuli, Policy Analyst, Advocacy Strategist, Kenya.

“The critical question is: where can we best use our convening power to make a difference?” Peter Gluckman, Chair of the International Network for Government Science Advice, President-elect of the International Science Council, former Chief Science Officer to the Prime Minister of New Zealand.

“Decisions are often made by politicians. But the voices of the people, especially young people who will live with the results of those decisions, and the voices of scientists, also need to be taken into consideration.” Jayathma Wickramanayake, UN Secretary-General’s Envoy on Youth, Sri Lanka, ad personam.